Fr. Francis, a native of DRC who has been a part of the Missionhurst congregation for 28 years, served for 15 years in the Philippines before being called back home to serve as provincial superior of the province of Southern Africa (DRC, Zambia, and South Africa).

During his time serving in Kinshasa, the capital, Fr. Francis encountered four children abandoned by their parents—two girls and two boys, each with a different father.

“Eventually, I came to know that the oldest girl was taking care of all of the younger kids. When she went to the convent school, with the help of the missionaries, I had to help the younger kids to go to school, but I didn’t have enough money help them also with food.”

Fr. Francis asked the younger children if they would rather him pay for their food or for their education, and of course they chose food. “How could they study on an empty stomach? This is a dilemma for many families in DRC, not just for missionaries. Many parents want to help their kids but simply cannot.”

Unfortunately, due to health concerns, Fr. Francis currently lives at the Missionhurst mother house in the United States and is unsure as to when he’ll be able to return to his people.

State-sponsored violence, material poverty, learned helplessness, and lack of access to decent education and healthcare for children and families--these are just some of the obstacles that Fr. Francis Nsapo and his fellow missionaries face in the Democratic Republic of Congo.

Despite the fact that the DRC is rich in natural resources, the instability and corruption of the government means that funds do not go to those who most need them: many children cannot afford to go to school, and few families have health insurance.

The lack of educational and job opportunities also causes a crisis among the youth of the DRC. “Many young men spend their time destroying property and engaging in violent behavior because they do not have the opportunity to do anything else with their lives—and this is the only way they know how to survive,” explains Fr. Francis.

Along with the lack of opportunity, there is also a learned helplessness among the poor citizens of the DRC, according to Fr. Francis. “Many people relied on the missionary priests of the past, sometimes too much, to the point where they don’t know how to take care of themselves. Sometimes the people do not trust the Missionhurst missionaries because we don’t give them money like the first missionaries did.”

Instead, the Missionhurst priests provide programs and pastoral outreach to help people get out of this learned helplessness and the cycle of poverty, and empower them to hope for and build more satisfying lives.

All of these challenges notwithstanding, Fr. Francis speaks with great affection for his home country and its people, especially the poor. "Two months ago I lost my father, and the poor people who came to visit me wanted to give me something—even just some bananas or peanuts in a plastic bag. Even the students! I know that’s the tradition, but I was wondering why all of these students, living in very difficult situations, didn’t just come empty handed. I did not expect that. I would’ve expected it from people who had something to share, but even the widows, who have nothing, brought something.”

“My father died in the afternoon and I had to say mass that night, and the Church was completely full…and all of those people stayed the whole night with me in the church, in prayer. The next morning, they were surprised that I wasn’t crying, and I told them it is because I feel so supported by them.”

“Whoever is kind to the poor lends to the Lord, and he will reward them for what they have done.” (Proverbs 19:17)

Please pray for the poverty and injustice that permeate the Democratic Republic of the Congo. Pray that God's peace and justice will move in the hearts of the people and that those in positions of leadership will listen to the needs of the poor.

Your prayers — along with your caring monthly gift —  will enable Fr. Francis and his fellow missionaries to continue to love, serve, teach, and pastor the the people of the Dominican Republic. 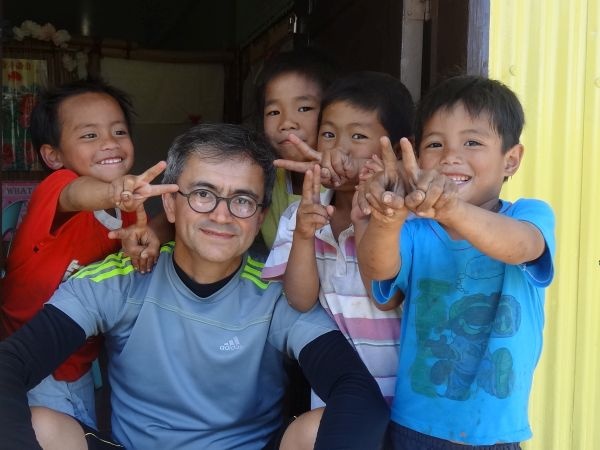